At the center of Bar Harbor’s downtown village, Central House offers easy access to shops, restaurants, waterfront, bike rentals, cruises, and Acadia National Park. A short walk down Bridge Street brings you to the sand bar, for which Bar Harbor is named, connected at low tide to Acadia National Park’s Bar Island. Enjoy sitting out on our front porch, where guests have relaxed for over 120 years, going back to the days when Bar Harbor was known as Eden.

If every house tells a story, then the story of Central House is one of welcome and hospitality.

When first established in 1887, the cottage cornered a small field edged in blackberries and was named Briarfield. During Bar Harbor’s Cottage Era, Briarfield was chiefly associated with the John Roll McLean and Emily Beale McLean family. The McLeans rented the cottage from 1890 through 1902, returning again in 1912. John McLean owned and published the Washington Post and the Cincinnati Enquirer. Emily McLean* was a well-known and sought-after hostess, both in Washington and in Bar Harbor where she welcomed guests from around the country and the world to 60 Cottage Street.

Their only child, son Ned (Edward Beale) McLean, spent twelve boyhood summers here. Ned would go on to take over at the Post from 1916 until 1933. Marrying Evalyn Walsh McLean (immortalized in a verse of Cole Porter’s “Anything Goes”) in 1908 and buying Briarcliffe on Bar Harbor’s Shore Path in 1910, Ned famously bought Evalyn the Hope Diamond with a caveat (that should anyone related to him die within six months, Cartier would replace the diamond with jewelry of equal value) in 1911.

The world was changing, and with it Bar Harbor and 60 Cottage Street. By the early 1920s, renamed Central House for its desirable location, the cottage was operating as a small hotel. Continuing today to welcome guests to Bar Harbor from around the country and the world, Central House extends a 125-year-old welcome and tradition of Maine hospitality.

*Before marrying John McLean, young Californian Emily Truxtun Beale had taken late nineteenth century Washington D. C. by storm. Independent and outspoken, she inspired her own caricature, the fictional Victoria Dare, in her friend Henry Brooks Adams’s comic novel, Democracy: An American Novel. First published anonymously in 1880, still in print today, Democracy was popularized on stage in the early 20th century and was reinvented as a comic opera (Democracy: An American Comedy, 2005) in the early 21st. 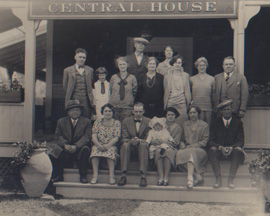 Guests on the front porch, circa 1924